How we made the switch

Find out how other families have made the switch to an all-electric household, saving money on their energy bills and helping the environment. It’s easier than you think to do good and feel good! When the Jago family embarked on renovations to their 3-bedroom family home in the Tuggeranong Valley, they started by comparing the costs of electric versus gas appliances and quickly realised that the economics of connecting gas did not stack up.

They chose instead to install ducted reverse-cycle air-conditioning for heating and cooling, a rooftop solar flat-plate hot water system and an induction cooktop for a total of about $16,000, versus the $20,000 they had been quoted to add gas. The family spent another $13,000 adding a 10kW rooftop solar PV system in two stages. “So on face value we spent more than the gas conversion, BUT we have not paid 1 cent on a power bill in the past 10 years.” The Jagos estimate that they have saved over $25,000 over ten years by not connecting gas and exporting their excess solar power for others to use.

“I wouldn’t install gas when I can use renewable energy – the economics are just a bonus.”

Although going all-electric was a clear winner financially, for the outdoor-loving family, the decision was about more than just the savings. Spending summers bushwalking and biking and winters skiing in the mountains, the Jagos decided “if you can, you should neutralise your greenhouse emissions”. They reckon they’ve saved 18.5 tons of CO2 from entering the atmosphere. 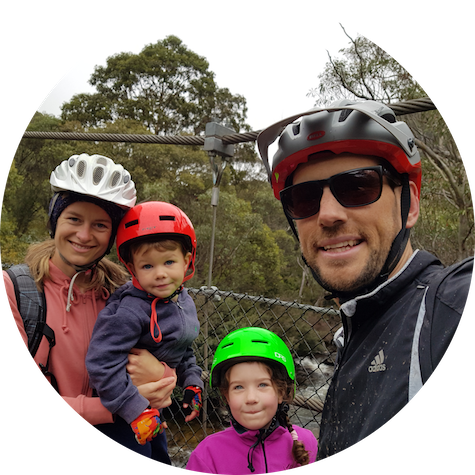 Maggie & Surinder’s home was a typical 1960s brick house, built with little consideration to energy efficiency. Since buying it in 1995, the family has made many changes that have improved her comfort and reduced their energy bills, including switching off gas in 2010.

A former sustainability advisor, Maggie makes the most of winter sunshine coming into their north-east facing windows while blocking western summer sun with outdoor blinds. They have added Magnetite secondary glazing panels to the original aluminium single-glazed windows. “These are wonderful in terms of sealing the windows along with the blockout curtains and pelmet.”

The ceiling now has R4 insulation, with covers over LED downlights and self-closing exhaust fans to minimise draughts. Maggie and Surinder have retrofitted insulation into the cavity walls and added bamboo floorboards and underlay over the original timber floor.

“It’s a very cool house considering it was incredibly hot without these measures put in.”

For heating and cooling, the house has three split-system reverse-cycle air-conditioners so that they can heat only the room in use. With winter morning sun, “once the room warms up, it stays warm until about 4 in the afternoon”. Maggie recommends ensuring a new air-conditioner is rated down to -15 degrees to work effectively on frosty mornings.

The family recycles as much as possible, and composts food scraps to fertilise vegetables and bee-friendly flowers. The garden has a 2000 litre rainwater tank, a clothes line in a sunny spot, and a solar pergola angled to allow winter sunshine into the patio while shading in summer.

On the roof are the evacuated-tube solar hot water system, that feeds to low-flow showerheads for minimising water wastage, and the solar PV system that means their electricity bills are usually in credit in summer and autumn.

“Having turned off our gas, we have an all-electric house, means that we have a huge saving in terms of energy but also costs as well because we want to do everything for mother nature in terms of saving energy and saving water. So over 10 years, we’ve probably saved $10,000 because we switched off gas which is quite wasteful and the service costs can be very expensive.”

Take a video tour around Maggie and Surinder’s house. 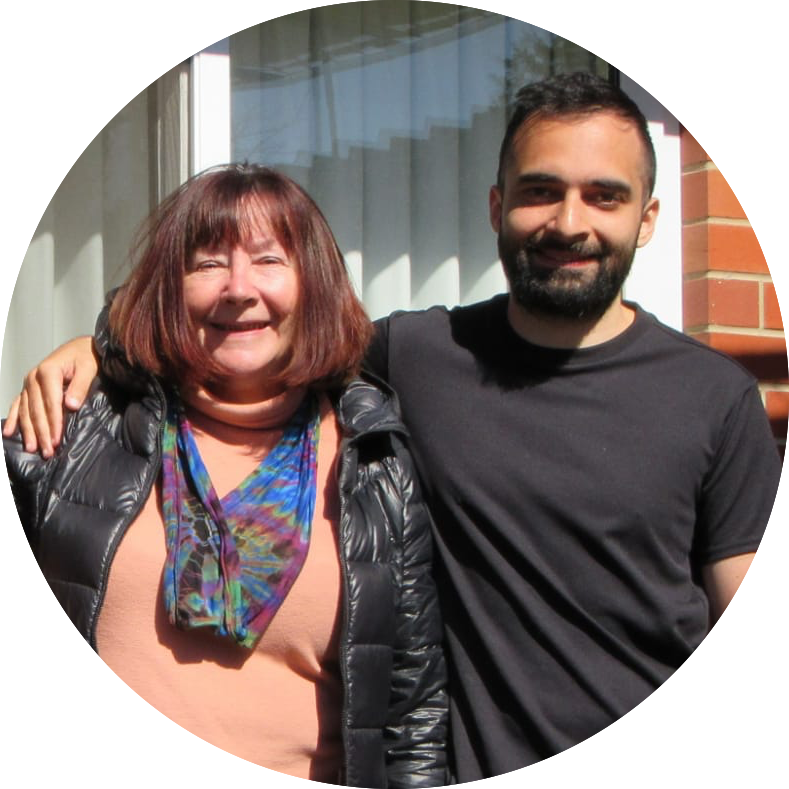 When the Prowse family built a new home on a vacant Mr Fluffy block, they took the opportunity to go all-electric and embrace passive energy design, including north-facing orientation, triple-glazing and a well sealed and insulated building construction.

“In the context of a new build, there wasn’t much difference in the cost of electric appliances compared to gas appliances, and we are now saving a lot of money in running costs. We don’t have energy bills any more: our electricity account has been in credit since we moved in!”

The family chose to install a Sanden hot water heat pump that only uses around 1.5–2kWh most days. Even with two teenagers, the family has never run out of hot water.

In-slab hydronic heating powered by a Bosch heat pump keeps them toasty warm in winter, and a Daikin reverse-cycle air-conditioner takes the edge off summer’s extreme hot days. Not only is the family’s comfort vastly improved compared to the ducted gas heating in their previous, draughty house, they have eliminated the $1500 winter quarter gas bills.

Their 600mm Bosch induction cooktop is fast, responsive, efficient and easy to clean. “We would never go back to gas cooking”.

Adding rooftop solar PV meant the family can make the most of going all electric, reduce their reliance on fossil fuels and avoid the extra gas supply fee. 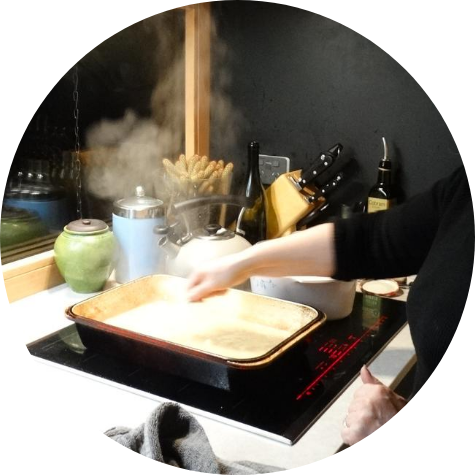 When John moved to Canberra in 2014, he knew he would need a good heating system, so found a small three-bedroom house with good ceiling and wall insulation, underfloor ducted gas heating, gas instantaneous water heating and a 1.5kW solar panel system on the roof. Over the next few years, he fitted double glazing to all windows, added underfloor insulation and converted most of the lights to LED, rewarded by declining power bills.

However, John found that he didn’t like the wastage of heating a whole house when he only occupies one room at a time.

“During last year, I realised that if we are going to reduce our greenhouse emissions, we can’t wait for the government to do everything, individuals have to do their part.”

John had read several articles in Renew magazine that showed that electric systems were better financially than gas, so he took the plunge rather than waiting for a gas appliance to break down.

After investigating rebates to replace ducted gas like-for-like with a ducted heat pump system, John decided he could save money and power by installing two highly efficient Daikin US7 reverse-cycle heat pump split systems, rated at 5.0 kW heat and 3.5 kW cool in the living area and 3.6 kW heat and 2.5 kW cool in the main bedroom. The total cost to install was $6,650, plus $193 to have the gas heating removed.

For hot water, John again chose not to take up the rebated system and opted instead for a Sanden Eco Plus system, “the highest efficiency heat pump hot water system in Australia with a COP of 5.96”. It’s refrigerant has a lower global warming potential and the system also has a variable timer so that John can take advantage of off-peak electricity rates. Installation cost $4,858.

Although he hasn’t yet had an electricity bill, John knows he won’t have to pay the $300+ supply charge for gas nor the gas consumption charge this year, and the small solar system should cover his modest air-conditioning use over summer. He also aims to recoup some costs by selling the old copper pipes and parts of the old ducted system.

“As far as comfort goes, the hot water arrives more quickly at the tap than with the old instantaneous gas heater, and I can turn it right down without the system shutting off because of low flow. The heating from the split system seems to be a more even temperature than the gas heating.” The family had replaced their gas heater with a ducted reverse-cycle heat pump system and installed solar panels and a battery some years earlier. However, they took their time to find the right cooker to fit into the existing gap in the kitchen. David was a little nervous about whether induction could match the performance of gas, so he did plenty of reading on the topic before choosing a free-standing Fisher and Paykel convection oven combined with a 90cm induction cooktop.

“Long story short, the install went smoothly, the cooker heats up as fast (or faster) than gas, and is wayyyy easier to clean!”

The family were motivated to complete their switch to an all-electric home for three reasons:
1. Desire to reduce their climate change footprint,
2. Irritation at their quarterly gas bill of $80-odd dollars where $75 was for supply and only $5 was for gas for cooking, and
3. Some concern about indoor air quality.

“With this change, our house is now all-electric – you can get green electrons, but you can’t get green gas”. 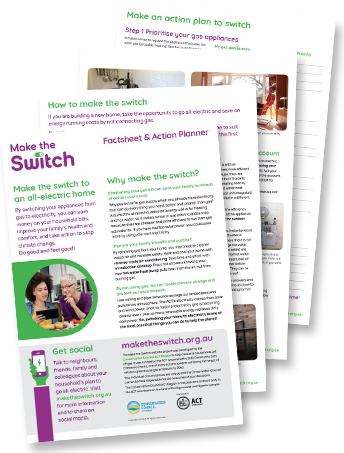 How to make the switch

Estimate your savings from switching to all-electric.

Get social and make the pledge to switch

There’s (green!) power in numbers. Share your pledge to switch from gas to electricity so friends and family can ﬁnd out how, too.

My home is switching to all-electric.
Go gas-free!

I’m switching off gas to save our planet.
You can too!

Fill in the form to send your results to your email address.

How to read your gas bill